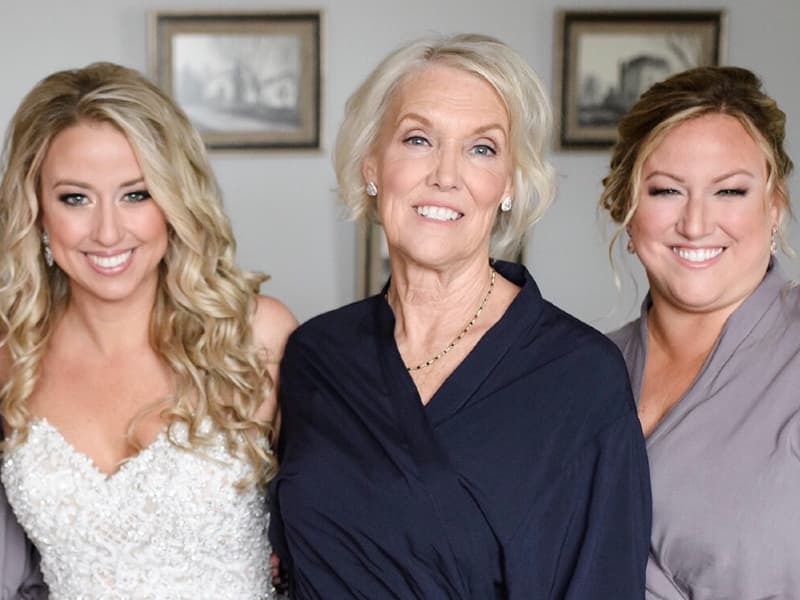 “You’ll have a glow on your wedding day no matter what,” says Regan, “but feeling good about yourself is so important.” Regan was positively radiant on her wedding day in June of 2019 — and so were her mom, Bobbi, and older sister, Erin, all with a little help from Rush dermatologist Sheetal Mehta, MD.

Ever since Mehta treated Regan’s father for melanoma on his nose several years ago, the whole family has traveled to Chicago from their Indiana hometown to see her for dermatology services. When Regan got engaged, she and Erin decided a little pampering was in order for themselves and their mom.

“Our mom is a neonatal nurse practitioner, so she’s always doing for everyone else,” Regan says. “We wanted her to do something for herself … and we knew that if we didn’t do it with her, she’d never do it!”

Mehta recommended procedures tailored to each of the three women’s needs, with treatments starting in January to ensure that the results would be in full effect for the wedding six months later.

Bobbi, who grew up in the era of sunbathing without sunscreen, got the most intensive treatments, chosen to treat sun damage and improve her skin’s tone and texture. She began with a platelet-rich plasma (PRP) facial with microneedling, and also had a laser skin resurfacing procedure. “It was incredible to see her transformation,” Regan says, “and it really improved her self-esteem.”

Regan and Erin each had a Melanage peel — a chemical peel that improves skin’s texture and diminishes fine lines, wrinkles and hyperpigmentation. “Dr. Mehta gave us her cell number so we could text her pictures as our skin got flaky and started to peel,” Regan reports, “and she was quick to reply to let us know that everything was looking just the way it should.”

Later, both sisters also had pulsed dye laser (PDL) treatment to reduce redness (Erin, who has rosacea, has continued with PDL treatments). And all three women had Botox and facial fillers to further diminish fine lines and wrinkles. “We were all 100% glad we had the procedures done for the big day,” Regan says, and the wedding photos are extra special because they all felt that they looked their absolute best.

“Talking with Dr. Mehta about what would work best for us was like talking to a sister,” Regan says. “I never got the feeling she was trying to sell us anything, and she was clear about what we did and didn’t need. She’s so approachable and supportive — we really feel like she’s part of our family. I even invited her to the wedding! As long as she’ll keep seeing us, we’ll keep traveling to see her.”